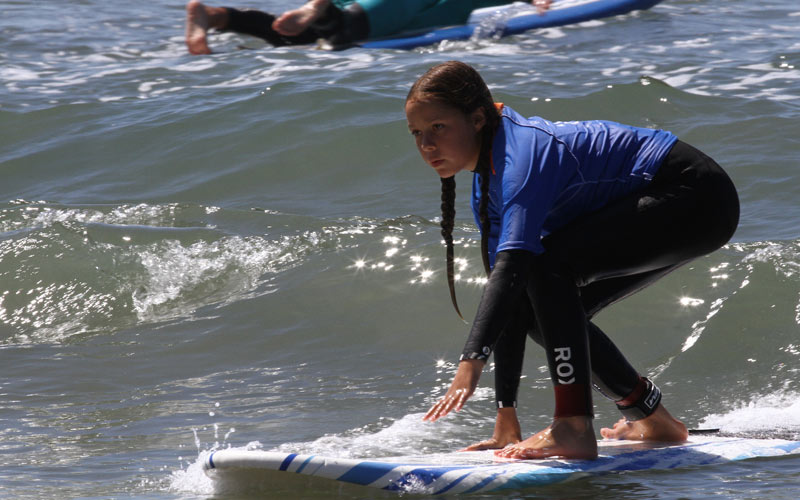 Mary Osborne Surf Academy has been sharing the beauty of surfing to all ages since 2000. Voted multiple years in a row by Ventura County Reporter and Sunset Magazine as the “Best Surf Camp,” Mary and her incredible staff have taught thousands of kids and adults to surf from ages 2.5 years old to 75 years young.

“My goal is to have a much more intimate surf program to ensure each surfer falls in love with the sport and will truly succeed. This means a more hands on personable experience for each student, smaller groups, safer surfing conditions and passionate instructors. I want every surfer at MO Surf Academy to succeed and not get lost in a daily giant surf camp with unsafe and poor instruction. Surfing is an incredible sport and I am here to share my passion with others for generations to come.”
~Owner,  Mary Osborne

All our instructors are highly qualified to ensure your child has the most efficient, fun and, most importantly, safe time out surfing. Children will learn surf etiquette, ocean safety and all the important basics to riding waves.

We provide all soft surf boards, wetsuits, and life vests for our “mini” campers. Our student ratio is 3:1 unless we have “tiny” campers who need special attention with a 1:1 ratio. The tiny campers will rotate in with instructors.  ***Ages are 7 and up

Please note, we are only accepting only 25 surfers per week. Every student must be signed up online and signed in/out every day by guardian.

All surf equipment provided. Life vests for our tiny surfers

Private camps and special classes are always available to suit your needs.

Due to intimate class sizes, we ask that your child attends the entire week.

No daily drop ins allowed. All children must be signed up prior to the week.

Due to  limited size of classes, no refunds 1 week prior to camp unless space is filled by another student.

MO Surf Academy Classes will start June 12, 2023 and run thru end of August 2023. Classes are 9-12pm every Monday thru Friday. We will offer a few afternoon sessions throughout the summer. Please check the calendar below for more information. 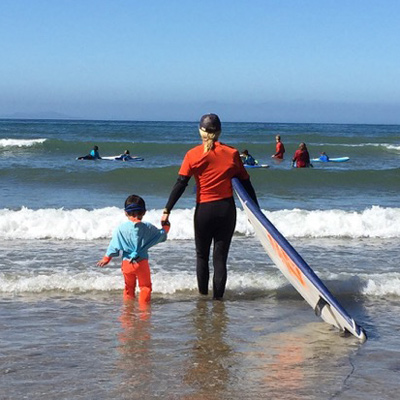 Osborne was born and raised on the 805’s coastline with the blue pacific as her backyard. Growing up with three older brothers, she found herself emulating their surfing habits. It was just a matter of time before a 12-year-old Osborne would learn to catch her first wave.

More than 23 years later with a lengthy list of accomplishments, the champion longboarder returned to her hometown of Ventura and started the Mary Osborne Surf Academy. She began the academy while on tour by dedicating a week of her summer to anyone who wanted to join. Osborne found herself booking two weeks to teach. That later lead to three, then four, and before she knew it, she was running a 15-week program.

“I really love sharing this with young kids, with anyone,” said Osborne. “It’s such a healthy sport to be out there.”

The sport also allowed her to be present in the lives of young surfers who wanted to make the sport their livelihoods. Osborne mentors her 18-year-old head instructor Alana Klassen, who is also driven to turn the sport into her profession. She, too, grew up in the beachside community.

“I’ve known Mary forever. I’ve always wanted to travel, and do what she does, so I just have to get out there and figure it out,” said Klassen. “Ever since I get in the water, I fell in love with it.”

California beaches have yet to fully shut down again amid the latest COVID-19 restrictions due to a fall spike in new daily cases. Governor Newsom and Ventura County officials have continued to remind those visiting beaches to maintain social distancing from others.

Attack of the Van Boyz

What People Are Saying…

Ms. Mary (as my Andrew calls you),

I just needed you to know I so love every thing about what you do. As a junior high counselor, I find it so rare to find someone who so naturally just can "speak" kids. You and your instructors are beautiful examples of confident, strong, companion, decent human beings and I love that you are out there everyday, doing the work, walking the walk. I work with "tough" kids, but I tell ya: if I have learned anything after all these years, it is this: we all just want to matter. We all (big or small) want to know we matter.

You do that for all the kids that show up to your camp. I watched as you made them all feel so important, so apart of camp. You are a beautiful human being Ms. Mary. Thank you for making my kids feel so important. Good luck to you, and I hope you continue to see success and I will probably bug you this winter for some lessons: they are hooked and I certainly cannot do what you do with them. And don't worry, as a former competitive athlete: I don't actually expect for them to be able to surf, when I say lessons: I really mean a play date to play on a board with you. For hell sakes I don't think they can even reach the water to paddle 😂

I am so impressed with Mary Osborne's surf camp for kids! It is AWESOME!!!My son is 7 and has never surfed before this week and I consider him a beginner swimmer as well. He loves it so much he is consistently the last one out of the ocean every day and doesn't stop for a snack break! Mary is an expert surfer and has a large crew of expert surfing staff so that each child gets individualized attention and instruction. They have a fun and non-intimidating approach and make everyone feel welcome. Safety is an obvious priority for Mary and her crew and I honestly have to say I never worried that my son was unsafe or surfing beyond his capability. Every surfer is encouraged to do their best. Mary and her staff are very warm and friendly and take the time to get to know each surfer and their family. Mondos beach is an excellent location for the beginning surfer as well as those with more experience. It wasn't too crowded either. Mary's friendly dog, Brick, was also a fun part of camp 🙂 I will definitely be sending my son to Mary Osborne Surf Camp again and will be recommending it to friends. I am even considering a lesson for myself! Ventura is lucky to have a pro like Mary Osborne!

Mary, I wanted to let you know that your surf camp is the best we have experienced around the world!! It was conducted with professionalism, safety and fun in mind. The student instructor ratio is like nothing we have ever experienced. Both my boys have left your camp knowing how to get up in the board and read the waves. Your instruction and instructors were patient, knowledgeable and fun!! The fact that you have your own bathroom for the kids to use is another plus!!!
Thank you for welcoming us and making my boys feel so special!
All the best of luck and we hope to see you in the future!!

My 5 year old and I did this camp together and it was AWESOME! I originally signed up my 4 and 5 year old, but my 4 year old was a little freaked out and Mary suggested we try it next summer. I asked if I could take her place and she said "of course!!" I was so excited! After having 3 kids, I was kind of worried I'd be too old, or too out of shape to learn how to surf. Her amazing, and very kind instructors had me up the first day, every day I learned something new, and I can't wait to go again, it's all I think about! As for my 5 year old he was already able to surf when we started, her instructors taught him to turn on the waves, how to catch one alone, and really taught him so much more than he already knew! Mary is extremely kind, and very good with all the kids and her instructors are the sweetest people! They keep the kids very safe and no one was ever out of sight. Being a mom I was looking all around at all the kids and was very surprised to see the surf school next to us being very unsafe. Mary's instructors keep the kids all together and have a great rhythm of having the kids surf a wave and another instructor brings them back. We are so stoked and can't wait for my other 2 kids to go Mary's surf school! Highly highly recommended!